with St Michael and All Angels

When St Michael’s was reordered in the Spring of 2007, we knew we needed a new cross or crucifix (a crucifix is a cross that has Christ’s body on it) to go on the wall behind the altar.

To our joy, Matthew Twigg, a member of St Michael’s who teaches Design and Technology at a local school, offered to make a cross for us. On September 29th, when the church was rededicated, Matthew’s cross was unveiled for the world to see – and everyone who has been in the church since has been awestruck by the beauty and power of this remarkable creation.

Here you can read Matthew’s thoughts about the creation of this work of religious art:

One of the disappointing things about the thousands of existing crucifixes is that a man being tortured to death on a cross only tells half the story: Christ’s execution without resurrection misses a reasonably central point of Christianity! From the artist’s point of view it means that making a figure being crucified could be any one of the hundreds of thousands of people who died in this world only to stay dead. To be a representation of Christ more is required. In making a new crucifix for St’ Michael’s and All Angels the challenge was to express Jesus’ death and resurrection in one form that would be instantly recognisable as a traditional iconic cross shape.

If there are two things that are valuable about an artists work they are the quality of communication of ideas and the personal reaction of the artist to the subject matter. Unfortunately the perceived quality of a lot of art today goes hand in hand with the promotion and ego of the artist themselves. A trap that needed some skill in avoiding with this crucifix was the fact that it is unavoidable to put one’s own personality into the work but putting too much of one’s self into it would cloud the result. If you read an account of anything in the Bible and then try to paint, or sculpt or re-tell a scene in order to communicate that story then your own personal reaction and skill (or lack of!) are bound to get in the way. With this in mind it was vital from the start that I needed to borrow Occam’s Razor: Whilst unavoidably making this a personal vision and in order to combine and harmonize many elements within the work and ensure that they communicated clearly and directly with the viewer I would have to cut away at thousands of unnecessary details, distracting traditions and pre-conceptions in order to really focus on the fundamentals.

The main ideas that I chose to build on were:

¨ The wooden Crucifix (symbolic of torture, death, mankind’s inhumanity and the pain and transience of the world) transformed by God’s love and the sacrifice of his Son into something life giving

¨ We do not literally see Christ with us now but his actions and the accounts in the Bible allow us to perceive his presence here and now if we but choose to search it out.

¨ Christ’s invitation to us to follow him, to take up our own cross. 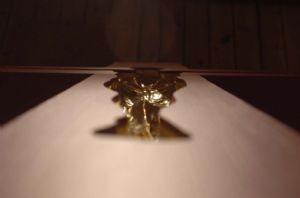 After reading the written accounts of the crucifixion I chose visual reference material from two very different Crucifixes. Firstly a most humble, tiny olivewood cross from the Holy Land that had a hole cut all the way through in the shape of a human with outstretched arms. This was given as a gift to my family by Jo Nevitt when our children were baptised at St. Michael’s. It is beautiful in its simplicity, loaded with very special personal memories and makes a link to St. Michael’s. Its form reminded me of either a key hole, the key to which is obviously Christ-shaped, or a small magnifying glass through which to see the world more clearly, or a gateway or portal, just a bit bigger than the eye of a needle.

The second crucifix was the massive red and gold structure to be found in the centre of Peterborough Cathedral. Making reference to that crucifix would provide a nice link to Peterborough and the wider diocese.  The simple symbolic use of colour in that crucifix was interesting because it depicted Christ’s royalty and risen, shining form in the gold of the figure, and reference to the death, suffering and the spilt blood of Christ was made in the crimson colour of the cross. I decided to keep the gold figure but go for a red that would be darker, purple even, to suggest royalty and be similar to the liturgical purple used in church. This would also be useful in trying to evoke a more visceral response by suggesting a crucifix that had been soaked in blood now dried. Most importantly a dark purple would not clash with our carpets…

Having worried for months about what to do I found that combining these much simpler visual symbols allowed me to arrive at the idea of a figure shaped hole cut into the surface where a golden figure would reside, like the embalmed remains of a body laid in a tomb or wooden coffin. This figure might also appear to be carved out of the cross itself in an act that changes the cross itself from device of torture and death to a device by which to see the risen Christ and a visual representation of Christ’s example. From there it was a very short but literally inspired step to carve the figure out of the cross facing inwards so that it would appear as a “Hollow Face” illusion that any student of psychology will be familiar with. I loved this idea and stuck with it, despite the technical difficulties I knew I would be facing, for several reasons.  I didn’t like the idea of telling people what Jesus looked like and was dreading the start of work on the drawing and carving. Everyone has a clear image in their head, usually based on previous images they have seen, and they are all different. I was also nervous of the fact that some people are not happy with the idea of making images of God or Jesus, and I wanted to make this crucifix have potentially universal appeal.

By having a golden shape full of dazzling reflected light, I could represent Jesus as the light of the world being projected out towards us as a result of his actions all that time ago. It also meant that the hollow shape would represent a variety of things: the ‘shape’ left by Christ’s actions in the world (the shape that we perceive through the gospel accounts), the hollow of the empty tomb, the fact that Christ conquered death (symbolised by the man-shaped wound cut into the cross) and at times it might come to represent our sense of loss that he is not physically here with us today, but we can see now, if we look, where he actually was all that time ago. The fact that the hollow shape would invert and appear to pop out when the viewer stands directly in front would be the ultimate pay-off (if I could get it to work in gold) because the viewer would walk towards this cross with a gaping hole cut deep into it seeing only an empty space until, having finally completed their pilgrimage to the foot of the cross, they would experience the revelation of the image of the risen Christ.

A human being tortured to death is a difficult scene to view. The image of Christ suffering, however excruciatingly depicted, demands the viewer to use their empathy to voluntarily put themselves in that position, not look away from the image, to try to understand why it happened. Can you imagine yourself volunteering to be crucified? Confronting people with a very stark and brutal image can be done (Look in the Lady Chapel at Ss. Peter and Paul, or watch “The Passion of the Christ”) but in a church where a large proportion of the congregation are very young children how can you make showing the gore involved in flaying and execution obvious to older members but not disturb small children for the rest of their lives?  If the viewer wants to cast themselves in the mould of Christ then as they willingly imagine entering the actual mould in this cross they will find the nails, the thorns and the spear extending out towards them ready to pierce their skin. To voluntarily follow in the path of Christ there is sacrifice, there will be pain, there is suffering.

There is no blood on the shining figure of light portrayed here but the blood that has been shed is now soaked into a dead piece of wood. The dark purple, ‘dried blood’ colour represents the temporal concept that the crucifixion had taken place; that crucifixion was a thing of the past and the resurrection has taken place. The blood soaked into this cross belongs there, in this world and in the past.

Within the church and during services the object is designed to work in a certain way. Because of its position on the side wall (as you enter) and the fact that your physical point of perspective relative to it alters its shape and meaning, then movement around and towards it during communion takes on a special significance: The inverted image and the perception of a solid figure projecting out only occurs when the viewer has made the short pilgrimage to place themselves directly in front of the cross. This occurs for everyone at the time when communion is taken; as we line up ready to share the bread and wine, thereby becoming one body, the image of the risen Christ’s own body is revealed to us if we choose to look up. 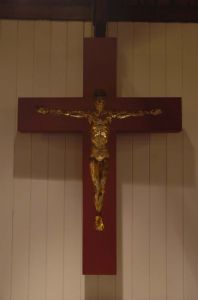 I have always thought that the highest form of art is Folk Art, that is to say art produced not for its own sake or the self aggrandisement of the artist, but art that is created within a community for use within a community.  This has been a high wire balancing act with no safety net. I think I have achieved everything I set out to do and have managed to give this special community an artefact that is useful and beautiful. I have tried to balance a wide range of criteria and ideas important to other people as well as express a personal point of view through my own vision.

It has been my very great privilege to have been entrusted with this task and I hope that in seeing and using this crucifix people are able to have an object that will aid reflection and prayerful thought without being distracted by its unusual form.

Out of everything I have ever made this work is the one that I have been most proud of and is one of the most fulfilling things I have done. As a work of art, as a manufactured item, as a work that is designed to function for a very specific set of criteria, and as a gift to others without doubt this is the best of me.